Saregama Carvaan Karaoke Review: Pre-Loaded Songs and the Ability to Sing Along

Launched in 2017, the original Saregama Carvaan was a wireless speaker unlike anything else available in the segment. With its own built-in tracks focused on Saregama’s vast repository of retro Indian music, the Carvaan was innovative, unique, and incredibly easy to use. Later Carvaan models have added features such as a battery for portability and Wi-Fi connectivity to stream podcasts. However, the core experience remains focused on ease of use, and quick access to music that appeals to older Indian audiences.

Saregama’s latest Carvaan product has everything that the Carvaan 2.0 does, with one big addition – karaoke mode. The Saregama Carvaan Karaoke is priced at Rs. 19,990, and lets you sing along to over 1,000 tracks that have been made specially for the karaoke experience. Is this new feature worth the considerable price? Find out in my review. 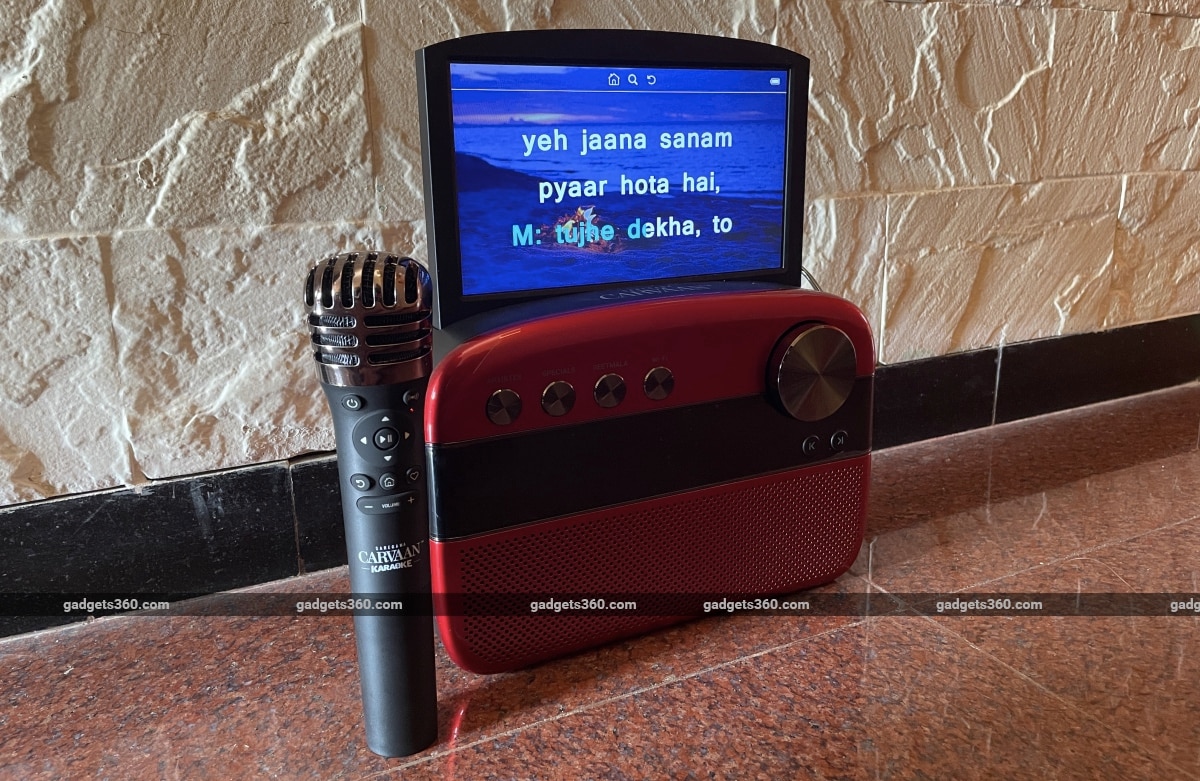 The Saregama Carvaan Karaoke has a 9-inch colour screen to display lyrics, and navigate the Karaoke interface

The core experience of the original Saregama Carvaan has been the built-in tracks, covering various eras of Indian film music categorised by singers, actors the tracks were filmed with, music directors, and more. Like previous versions, the Saregama Carvaan Karaoke has over 5,000 pre-loaded tracks that can be accessed directly via its speaker without the need to connect to any external devices or the Internet.

The basic experience is a familiar one. The device is easy to use, relying heavily on the idea of the playlist ‘shuffle’; tracks are categorised and labelled, but the small monochrome display and simple controls mean that the Saregama Carvaan wants you to stumble upon tracks at random, rather than go looking for something very specific. All of this fits into a retro-looking design with big, clearly labelled buttons and tactile dials. The device starts up quickly and you can start using it as soon as you press the power button.

This aside, there’s also the ability to connect to Wi-Fi to access dynamic content curated by Saregama (somewhat aptly called podcasts) like on the Carvaan 2.0, FM and AM radio, Bluetooth, USB and Aux In, and the big new feature that gives the device its name – karaoke. As such, there’s plenty by way of connectivity options, and you can choose to listen to your own music from a different source device if you want a break from the built-in content.

For the headline feature, the Saregama Carvaan Karaoke has an electronically-controlled retracting 9-inch colour screen with a resolution of 800×480 pixels. This screen pops up from the top of the device when the Karaoke mode is activated, and drops back down when it’s switched to another listening mode or turned off. This isn’t a touch screen; the user interface for the Karaoke mode is controlled using either of the two included wireless karaoke microphones. There’s also an HDMI video output on the device, letting you use the karaoke functionality on your own TV if you want. 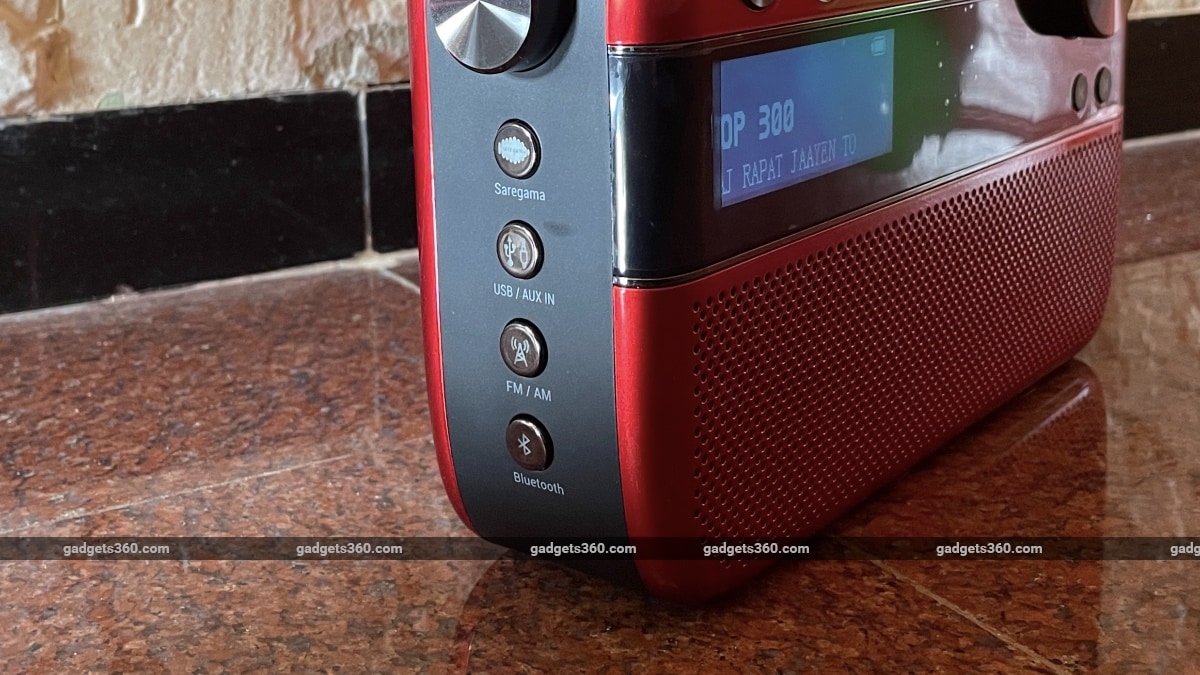 Source options include Bluetooth, FM radio, and USB, apart from the built-in music

While the controls for the regular music functionality are all on the speaker itself, the karaoke function is controlled using either of the two included wireless microphones. These are already paired to the speaker out of the box, and automatically connect to it on being turned on. With Karaoke mode active on the speaker, the buttons on the microphones can be used to select karaoke tracks and navigate around the interface, as well as adjust the volume and select favourite tracks. The microphones are powered by two AA batteries each, which are included in the box.

The Karaoke mode on the Saregama Carvaan Karaoke works quite well

We’ve spoken about the core Saregama Carvaan experience across numerous reviews including those of the original Carvaan and the Wi-Fi and podcast enabled Carvaan 2.0. The Carvaan Karaoke offers a practically identical experience, and Saregama continues to build on its podcast library to offer more dynamic content beyond the built-in audio tracks.

Sound quality isn’t exceptional, but the speaker is tuned to make retro music sound a bit better and clearer. External audio sources didn’t sound as good as the built-in tracks on the speaker. As before, the appeal lies in the overall experience, rather than technical performance.

The new karaoke experience is quite unique, bringing home something that you typically only find in bars and restaurants with specialised equipment. It’s impressive how well Saregama has managed to fit this functionality into a small, home-friendly package, and merge it with the company’s tried-and-tested capabilities and music library. The microphones don’t need any special effort to be paired with the speaker, and are functional when the karaoke mode is on. 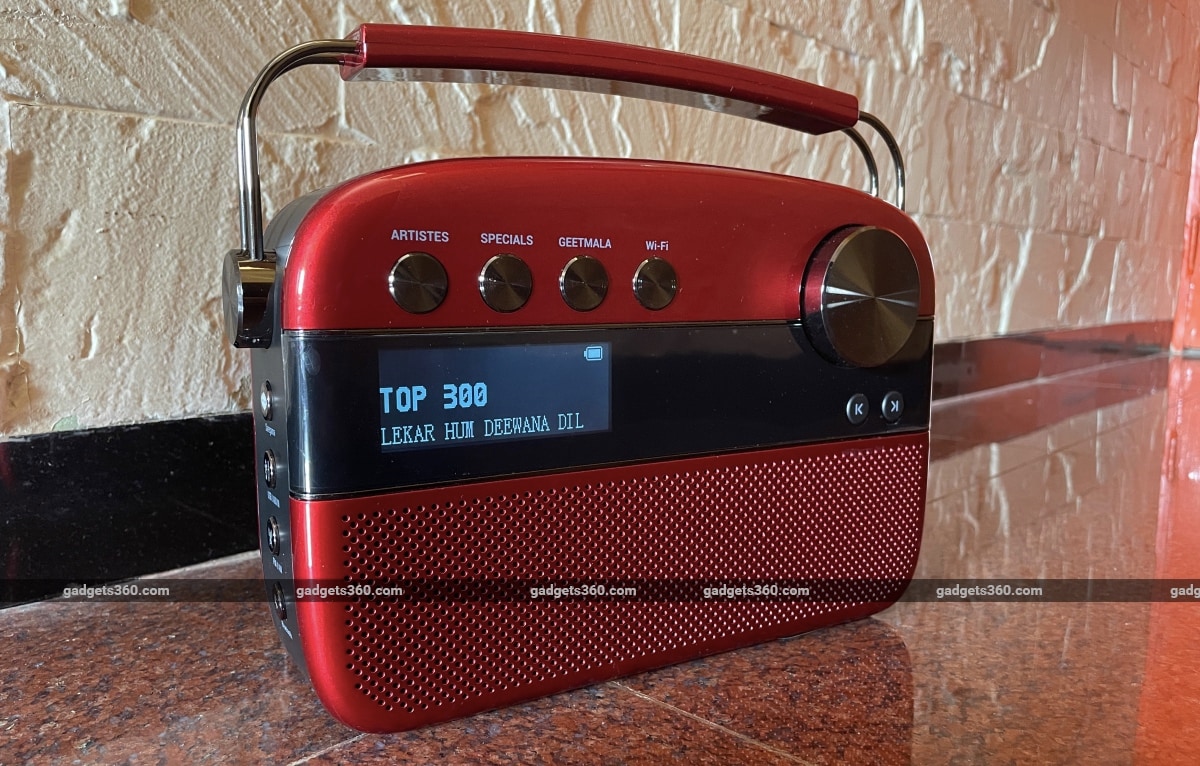 The Saregama Carvaan Karaoke has a huge collection of over 5,000 built-in tracks, covering various decades of Indian film music

How loud your voice can get depends on the volume of the speaker, but the volume levels of the music and voice are well matched for a pleasant karaoke experience. You can’t adjust the voice and music levels independently, but this wasn’t really a problem. The sound from the microphone had a slight echo to it, which oddly made the karaoke experience sound even better. The display shows lyrics and highlights specific lines and words based on timing, exactly as the karaoke experience would be in a bar.

There are around 1,000 tracks in Karaoke mode, categorised by artistes, directors, and the actors the songs were filmed with. This makes it easy to find a track you can sing along to, and is sensibly not as random and uncontrollable as the regular listening mode, given that you would need to be able to find music you’re familiar with for a good karaoke experience. While obviously not as vast as the main library, the karaoke selection is decent enough and covers various tracks across multiple decades of Indian film music.

The speaker has a 5,000mAh battery, and charges using its own 18W power adapter, which is quick to top it up. I got around four hours of battery life with mixed use, but this can vary significantly depending on how you use the Carvaan Karaoke. The karaoke and Wi-Fi modes will use more power than playing the built-in music or using this device as a Bluetooth speaker, but even sparing use won’t get you much more than 5-6 hours of battery life by my estimates. This isn’t exceptional, but you do of course have the option to use the speaker while plugged in.

Saregama’s Carvaan range of speakers has seen gradual changes and improvements, but the core experience remains familiar and exceptionally well positioned for its audience. The latest change is a rather interesting one that will appeal to many, and can also liven up parties you have at home. All in all, the Saregama Carvaan Karaoke is an interesting product that does what its supposed to very well.

However, it’s hard to get past that price tag. At Rs. 19,990, the Saregama Carvaan Karaoke is over twice as expensive as the Carvaan 2.0, with only the karaoke functionality to justify the difference. It only makes sense if you’re a huge fan of singing along to retro music; if you can skip the sing-along part, the Carvaan 2.0 offers largely similar capabilities at a much more justifiable price.

Is HomePod mini the best smart speaker under Rs. 10,000? We discussed this on Orbital, our weekly technology podcast, which you can subscribe to via Apple Podcasts, Google Podcasts, or RSS, download the episode, or just hit the play button below.

Love it or hate it, you can't help but pay attention to what Apple is up to. More often than not, the Cupertino, California-based company ... Read More

Realme's foray into audio started with the basics; the affordable wired Realme Buds wasn't the most impressive offering in its segment even back then, but ... Read More